No Fishing Allowed In This Marsh Near Bayou Bienvenue

What was supposed to be another fishing trip ended up being another disappointment. Read on to learn about this fishing closure.

The other day I went fishing in Chalmette to target bass near the dock before taking a ride to scout out some redfish I had heard were biting in Lake Pontchartrain.

The tide was rising and bass were biting!

But there was a problem: the bass were small.

The solution? Time to move to find something a little bigger.

So I moved out into the marsh, taking a chance on a large pond with clean water that just "looked good".

Driftng that with a buzzbait produced some fish, and that was satisfying.

However, the next move revealed a bright orange sign with a startling message:

That's what it said, but to be exact:

Hunting, fishing, trapping or trespassing on land or water is strictly forbidden.

Violators will be prosecuted.

Don't believe me? Here's a picture I took. 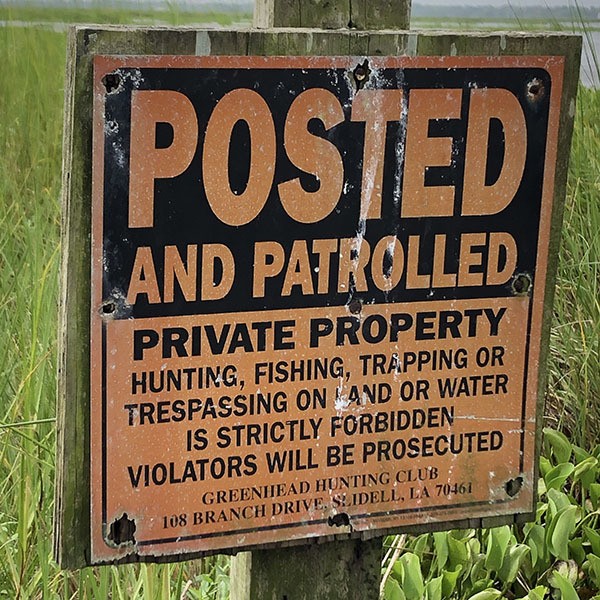 This is a problem.

One that raises a lot of questions you may be thinking right now:

Who is this property patrolled by?

Will I be held at gunpoint or fined?

How do I know where these property boundaries are?

Was I trespassing the entire time?

Isn't tidal water free and open to the public?

Who do these people think they are?

It's enough to make you feel helpless, like there's nothing that can be done to fight back.

But We Are Not Helpless

This trend of posted water is growing across Louisiana.

It's a complicated one, and it can be tough to decide where to begin tackling it.

That's why I joined Louisiana Sportsmen's Coalition and ask that you consider doing the same, too (if you have not already).

They are the only organization fighting for our fishing freedom!

I left that marsh to head into Lake Pontchartrain and search for those redfish mentioned earlier.

It took a little moving around, but I was able to hit paydirt and catch my limit. You can read that report here.

Devin is the founder of Louisiana Fishing Blog and enjoys exploring new fishing spots on Louisiana's coast. He prefers using artificial lures and casting tackle, but won't hesitate to break out a popping cork when the time is right.

Please log in again. The login page will open in a new tab. After logging in you can close it and return to this page.