Restricting the access of navigable water doesn't affect a few fishing trips, it erodes our cultural heritage, shuts down businesses and puts Louisiana in a poor light.

What you'll find below are the true stories of people who have suffered at the hands of posted waterways. 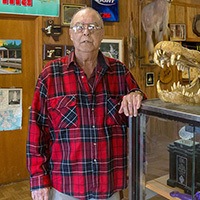 Williams, Inc. plans to put a gate or floating structure to end all access out of Bob's Marina into the Shell Barge Canal/Intracoastal waterway.

We are in shock and highly upset by this decision as this will end a small family business that my grandfather grew and maintained himself everyday for 25+ years to allow others to easily do the things they and he loved to do.

This won't just affect us here at Bob's, soon there won't be any waterways to fish.

Several other canals back here are currently being gated off and will continue to be gated off.

Thanks for subscribing! Here's what to do next:

This one time I had two clients from Chicago who wanted to enjoy the great fishing they heard so much about. So we set out in windy conditions to fish a pipeline canal that offered a little shelter.

Later that morning a group of people were returning from a hunt, a man with his grandfather and two sons.

This man pulls up and proceeds to tell me that I was trespassing so, in return, I asked him his name. He became hostile at that point in time, proceeding to cut circles in front of our boat, cussing me, and so on.

I thought the guy was going to have a heart attack he was so hot. Then he threatened to call sheriff in which he did. I told the guy my name because I wanted to verify who owned the pipeline I was in and not have some guy just tell me to get out.

When the sheriff contacted me I told him how the guy did circles and cussed me and the sheriff was surprised because the guy told the sheriff he never even addressed me.

The whole time my clients from Chicago were shocked. I shared with them about our situation in Louisiana and I have not seen or heard from them since. 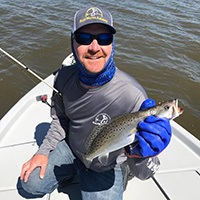 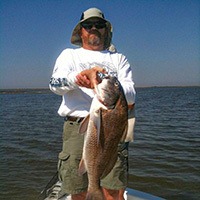 About 15 years ago my then 75 year old dad was watching a fishing show in Louisiana and said that he’d like to visit the state and go fishing, I told him to find us a place and we’ll check it out. I guess he got lucky and found us a guide in Golden Meadow that even recommended a place to stay.

We fell in love with it and made it an annual trip that over the years grew from just two of us to group of eighteen anglers fishing Louisiana over the last 15 years.

Some of the guys enjoyed it as much as we did and booked their own trips to take their families. We would buy so many pounds of shrimp that we would even hire the locals to pull the heads off and pack them up for us.

But today we no longer visit Louisiana, on account of not being able to access the waters that the guides had been taking us for years. We quit coming to your state last year and are spending our many thousands of dollars on trips in our home state.

I would love to have brought my grandsons to Louisiana to experience y'all's great fishing, but all those plans are not going to happen thanks to the greed in your state.

Y’all come to Texas, we welcome all visitors.

Help us put a stop to posted water.

Are you a business? Consider this membership level.